This will be my last post for a while as we are off to Spain where my Mum, Gran and Aunt and Uncle live – I have finished all my stitching and posted it and made my last pine cone the other day. Of course I am taking some more with me – making a start on next year’s ornaments!

We have had friends round this evening for a pre- Xmas party and tomorrow are having some presents and a traditional Xmas dinner with turkey and all the trimmings so that the children don’t feel too deprived! When in Spain we will have a picnic on the beach for Xmas day and a bar-b-que.

We arrive on Monday in Spain and we have booked a trip to Valencia for Thursday and Friday. Jacob and I went for the day in the summer but I wanted to go back as we did not have much time. We visited the fabulous old cathedral which has real relics in and then went to the modern City of Sciences area to see the aquarium centre which has the most wonderful beluga whales and seals. If you want to have a look at some pictures then check out this link.It is a beautiful city like so many in Spain and I’m sure we will be going back again after this visit. We also have plans to go up into the mountains again and to visit the wonderful natural outdoor spa pools with heated water and fabulous mountain views. It is a tough life but someone has to do it!

I hope that you all have a lovely Xmas and I will post when we get back.

I learnt to use the internet about 10 years ago and at the time learnt how to write web pages using HTML – not that I have really needed to use this since. However it has come in very handy in putting together this blog as I at least have a working knowledge of how to structure the pages, move pictures etc. Just shows that you never know when some little bit of knowledge will come in handy! I have put together a little slide show of some of our pics from re-enactment on the medieval re-enactment page so I hope you like them – quite a few are taken this year at Jennie and Blackie’s medieval wedding (see Finishes 2007 page for more on that).

We have finished putting up all the Xmas decorations – I do have some pictures to post but the little creative geniuses that are my children have got the lead for the digital camera somewhere in one of their rooms as they have been making models out of Plasticine and filming little animations with our camera (anyone remember Morph?) so that will have to wait.

I have been trying to finish one of the last of my cross stitch ornies that I am using some of the wonderful sparkly fabric for. Unfortunately I have chosen a very high count fabric (at least 28 if not more) so am having trouble seeing it and have had to do lots of unpicking! It does however have to be finished by Friday as it is a present for a friend and she is coming here on Sat which is the last time I will see her before we fly to Spain on Monday 17th (yippee). My Mum lives in Spain so we are there for Xmas – she keeps ringing and telling me how hot it is there and it is very wet and cold here so I can’t wait.

I also have to finish off the last of the other snowflakes that I have made as I am giving these instead of Xmas cards this year. The pic shows them almost done – I just have to stuff with wadding and sew up but I am out tomorrow having an Xmas meal with people from work so that will have to wait till Weds. I can see that despite starting in Sept I will still be finishing off my Xmas stuff at 2 am the morning before as usual! Hope that you are all a lot more organised! 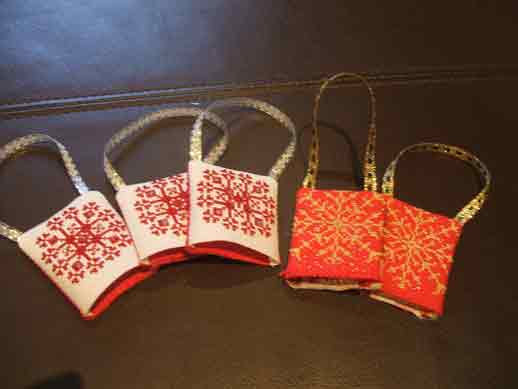 Have just realised that earlier on this evening I accidentally deleted my first post which introduced the whole blog which leaves the whole thing a bit stranded so this is a re-creation of that.

After a year of reading other people’s blogs , mainly Mary Kathryn’s wonderfully inspiring one and all the links from that I decided to start my own to share my work and hopefully interest others as I have been inspired by all of the wonderful things that you have all stitched.

I have created a series of pages about me , my stitching and other interests and hope that if you drop by you will leave me a comment so that I can start making some cyber friends. I am currently frantically stitching and creating for some fundraising I am doing (see Project Nepal page) and have lots to finish for Xmas. I have been stitching since my teens but have only been seriously addicted for the last few years. Would think about getting therapy but actually this is my therapy so have no intention of quitting!

The weekend before last I went to the wonderful Knitting and Stitching show in Harrogate. If you have never been to one you should – they are held about 4 times a year in various places in the UK and apart from the hundreds of wonderful stalls selling everything there are exhibitions of textile art and workshops on various different things. We had a girls’ day out with everyone from the re-enactment group and I spent far too much money as usual! A large part of that was on beading supplies for Ellen as she has just got a beading loom and there were some fab special offers at the beading stalls but a lot of it was stash for me for the next round of Xmas ornies.Here are some pics of what I bought.

I am planning to use all of this for the backing for Xmas ornies next year – particularly the blue fabric in the middle with snowflakes on. I thought it would look very good with the (multitude!) of snowflake designs that I have collected this year and not had time to stitch! 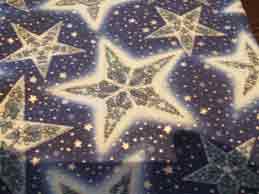 The snowflakes are very slightly sparkly as you can see from the above pic so I will stitch on the wonderful sparkly Aida and evenweave that I also bought at the show. I discovered this last year for my Xmas stitching – as well as the Aida with gold, silver ,blue etc fleck woven into it I have also found this lovely sparkly stuff that is more subtle. It just looks like it has been sprinkled with glitter rather than having an obvious weave.

I bought more traditional colours as well for ornies and baubles – mainly fat quarters as I don’t need much – most of the ornies are only a couple of inches square.A couple of these are patterns I had last year as well and I particularly like the red ones.

I then promised myself that I would not buy any more sash (ever!) but the following week I also found some wonderful co-ordinating fabric in my LNS that matched a piece I bought from Hobbycraft a while ago and I just had to have it so I did. This is honestly the last bit of Xmas fabric I will buy this year – I will stop now I promise!

So far I think I have made about 100 various ornies for my Project Nepal fundraising (see my web page for more details of that). Most of them have been the pine cones and baubles below rather than the stitched ones as I have had lots of positive feedback from these. A big thank you to all who have supported me in my efforts. 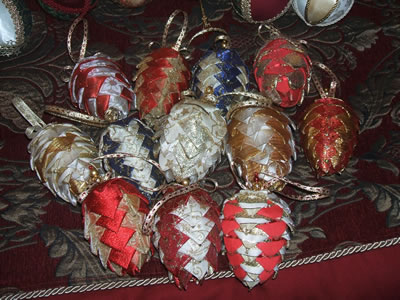 The original idea comes from a very talented woman called Sue Schofield who I came across last year at one of the stitching shows that I attended. If you want to find out how to do them she has published a book called Decorations to Dazzle and also sells kits from her web site.

I am carrying on with my stitched ones though as much as I love making the others I am suffering stitching withdrawal so am starting a new batch now for next year’s Xmas fundraiser. Below are some I made a while ago – the two identical red ones come from a lovely set of free patterns from Tree Trunk Designs which I found during one of my many wanderings on the web.

The blackwork leaf is a small part of a larger pattern from one of my stitch magazines – I tend to use little bits out of lots of patterns for ornies and have just ordered some more Quaker patterns online which have wonderful motifs for next year’s ornies. Other patterns I have found from the great Gift of Stitching online magazine which is great value compared to buying paper mags – not that it stops me as I like to have something to read in the bath or on the bus! Have just downloaded the latest copy and it is full of ornies – have not had  proper look yet but will print some pages off later when everyone is in bed – how exciting!

I did stop buying mags for a while as I felt guilty about not stitching things from them and thought that I had enough patterns but then I thought Jacob subscribes to Nintendo and doesn’t do anything with that so have been buying them again now and have treated myself to some new subscriptions as well on the grounds that it is cheaper that way. I don’t tend to buy kits unless it is something really special so most of my stitching comes from my mags.

My daughter Ellen has applied to go to Kosovo in the summer with her college to run a summer school project for war orphans and if she gets accepted will need to do some fundraising for that. If not I am sure I can find some good cause to donate my proceeds to and the school in Nepal needs continuing help to fund supplies and salaries.

Must go now to finish off the latest order .