In March 2013 I was lucky enough to go to China for work and this page is all about what I did. I was there for nearly 3 weeks in total so got a great feel for the place and absolutely loved it.

I train teachers at the University in Huddersfield and we have had a partnership programme with Guangdong Polytechnic in the city of Guangzhou in Southern China for a number of years delivering B Ed courses. Lots of our staff have been out to teach on that programme but due to family commitments I have never been able to do that. Last year the Polytechnic asked us to be part of a new programme delivering training on using student centred learning to teachers all across the province of Guangdong so colleagues of mine have been going out to China every month to deliver these courses.

My role was slightly different in that I was doing a course which involved curriculum design as well as student centred learning so this was very exciting as it was a new programme. Each team has been delivering the course twice while in China at 2 different locations for 6 days at a time.

Guangdong is one of the largest provinces in China and we flew to Guangzhou  which is the provincial capital. The following day I flew to Shantou, a smaller city in the north of the province and my colleagues travelled to Zuhai in the south. I stayed in Shantou for a week then flew back to teach in Guangzhou for the rest of the time.

The teachers in the group in Shantou all came from the same college which was a large vocational college teaching young people between the ages of 16 and 19 – mainly electrical engineering, computing and business studies teachers though there were also English, Maths and Citizenship teachers and one PE teacher.

This pic below shows me with the group at the end of the week. 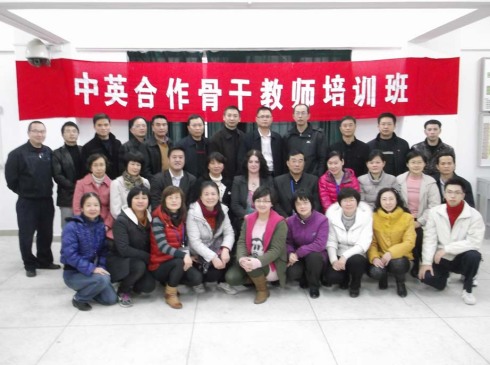 The group in Guangzhou all taught at other local polytechnics and colleges and were from a wider range of subjects including Finance and Marketing, Tourism, Art and Design, Psychology, PE, Mechanical and Production Engineering, Science, Computing ,Maths and English.The pic below is the Polytechnic building where I taught.

Both groups were absolutely lovely to teach, we were given the warmest of welcomes and looked after so well, especially in Shantou where I was treated like royalty! I was told before I went that the Chinese were hospitable, well that is a bit like saying it rains in Yorkshire, they were absolutely wonderful and so kind and friendly.

I was working with translators for the whole time I was there as apart from the English teachers many of my students didn’t speak much English and they were so brilliant as well, especially Gloria who came with me to Shantou and was not only my translator but my cultural advisor!

The two cities were amazing and I was in awe the whole time I was there. I had seen pics of Guangzhou before I went but that did not prepare me for the sheer scale of them, like New York times 1000. The miles and miles of skyscrapers and shops like I have never seen before, huge malls with all the shops you would expect and more, so many things to buy! Sadly I did not have much time to shop or any space in my luggage to bring much back so next time I am going with bigger cases! The shoes alone were amazing and all the beautiful clothes – Chinese women are very, very well dressed and really beautiful, it was retail heaven! 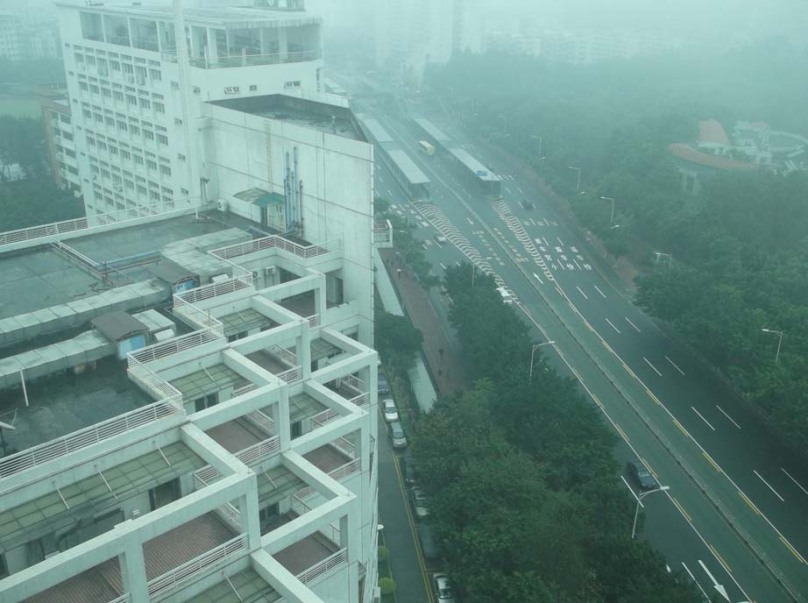 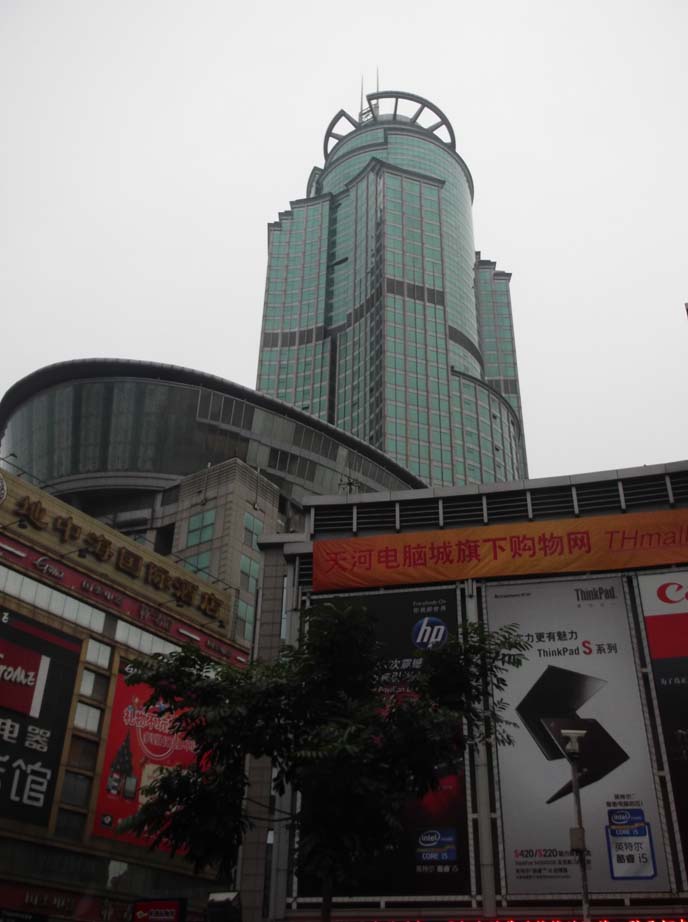 As well as the shops there were beautiful parks, in Guangzhou our hotel was right opposite Tianhe Park where I went for a couple of walks, it was full of people doing Tai Chi and singing and dancing – a wonderful atmosphere. 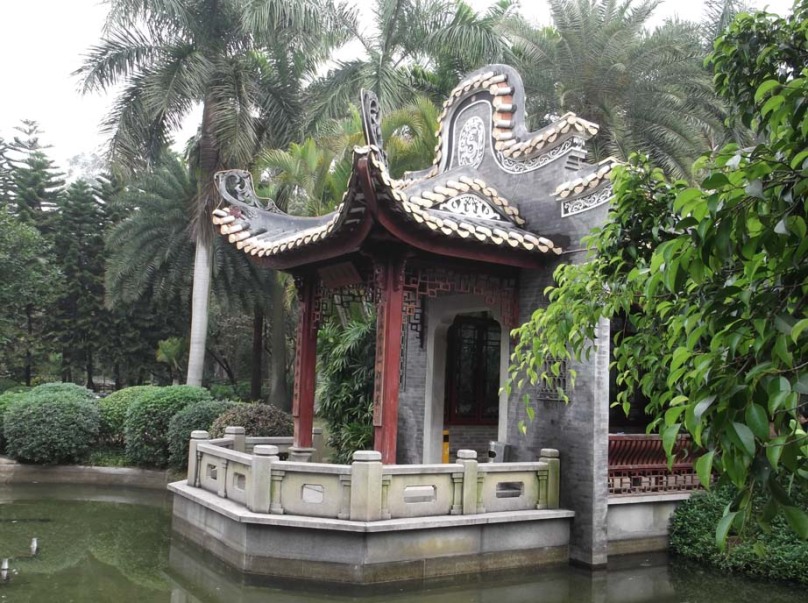 We also visited Yue Xie Park on one of our rest days which was again very beautiful, an enormous park with lakes and gardens full of statues as well as the biggest sports stadium I have ever seen and a museum. 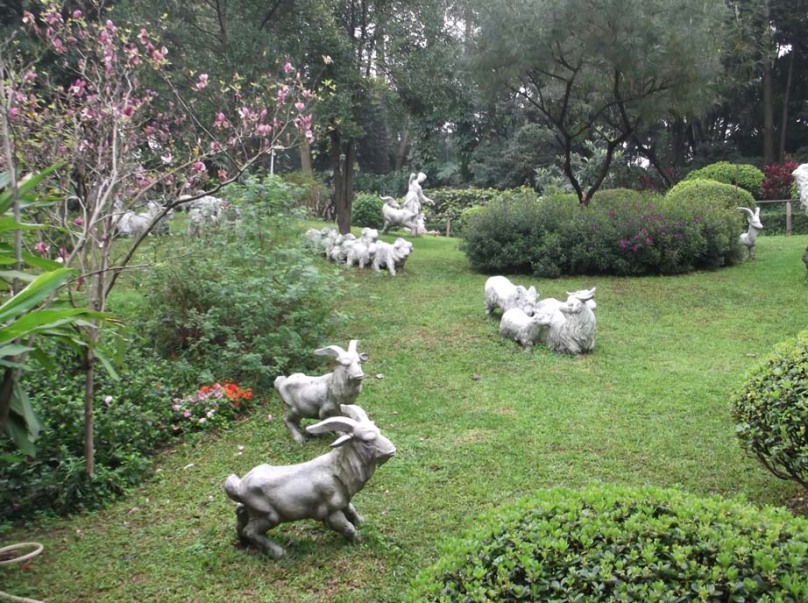 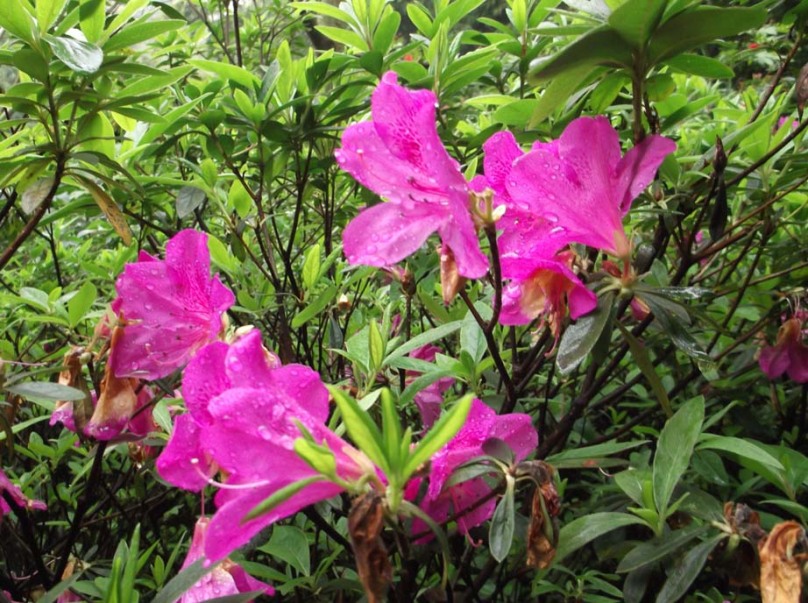 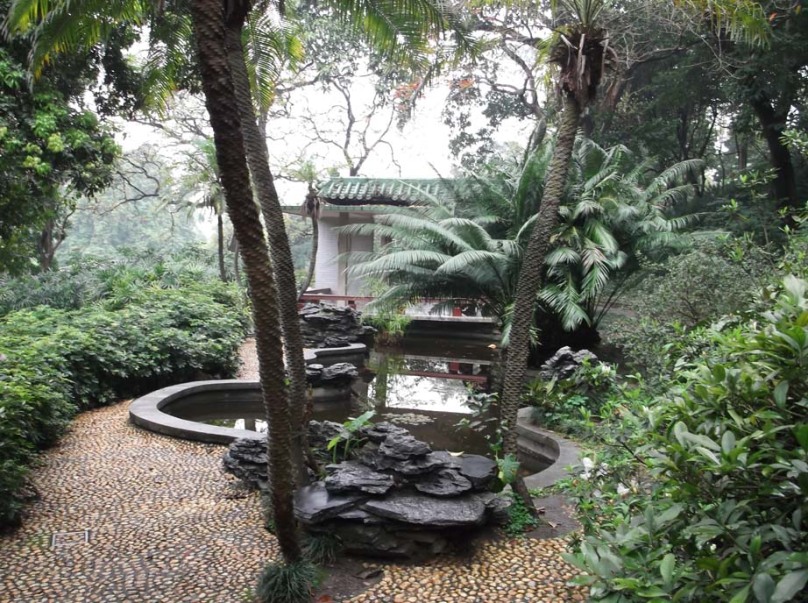 We stayed in two very lovely hotels, very luxurious and with beautiful rooms, the Daysun in Guangzhou and the Century Torch in Shantou. The first night I had a suite as there were no other rooms free,  I was very thoroughly spoiled by all the luxury! 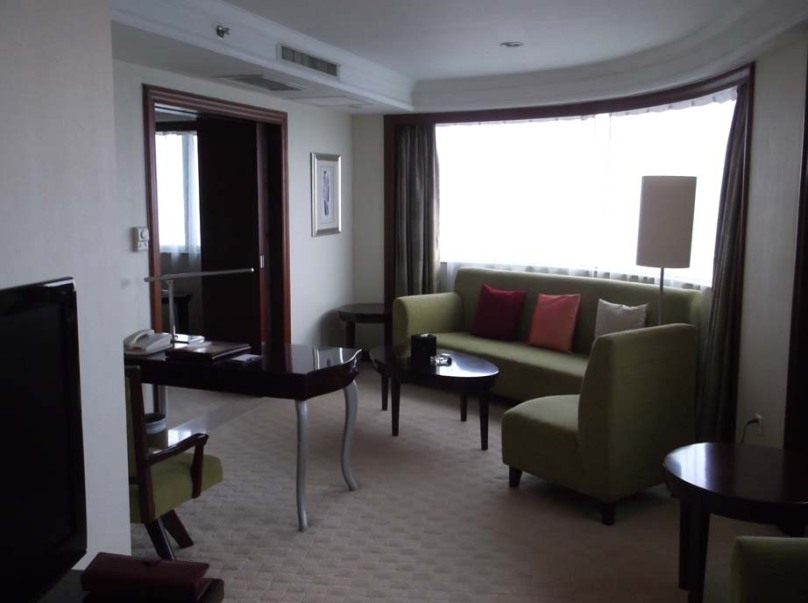 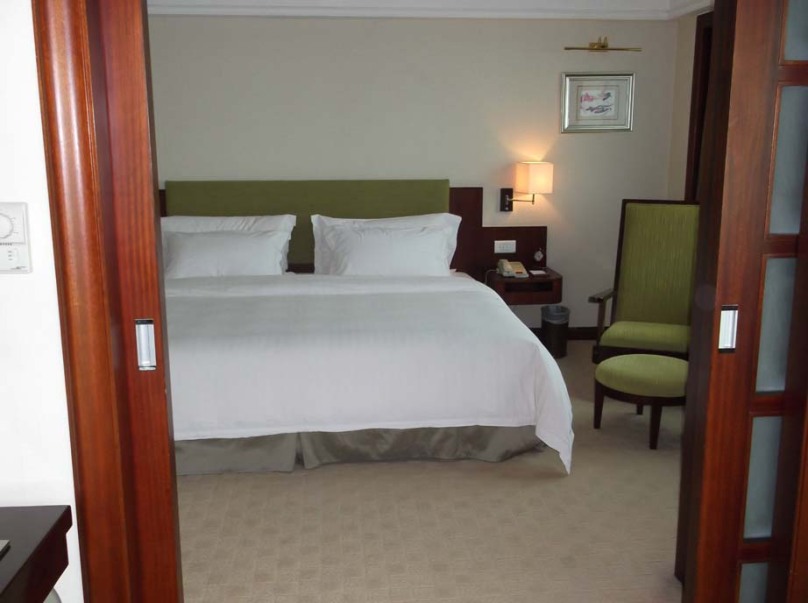 I love Chinese food anyway and I was keen to try new things. My colleagues had told me that the Cantonese people eat a wide variety of animals and like their food really fresh so I was looking forward to try some new things. I was not too adventurous (unlike my colleague David who tried rat!) but ate a wonderful variety of seafood and noodles and meat and fish balls of all varieties, all served with delicious sauces. The veg was all gorgeous, chinese cabbage and spinach stir fired in ginger and garlic and seaweed and tofu prepared in many different ways. I loved the steamed buns that were served with breakfast and all the delicious fish and meat soups. It was foodie heaven and I’ m very surprised that I came back being able to fit into my trousers! 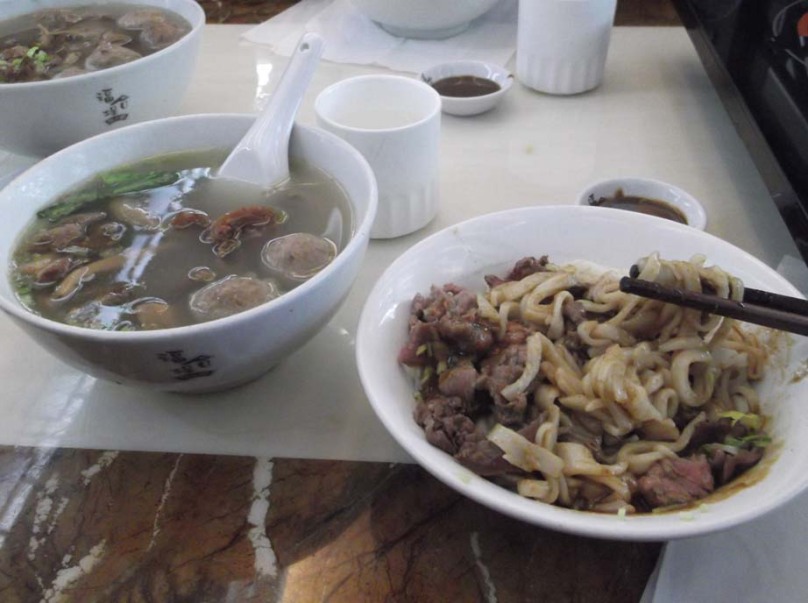 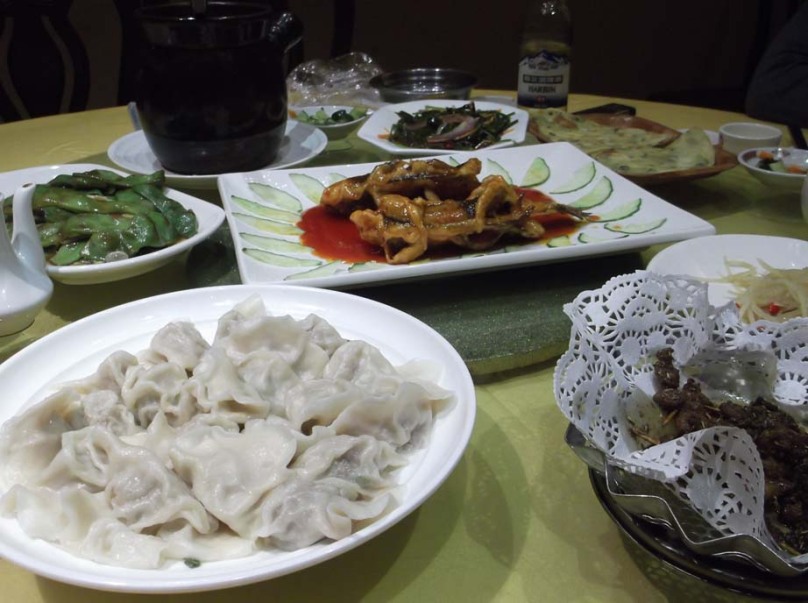 I also enjoyed visiting the local supermarkets when I was in Guangzhou and seeing all the wonderful things on display, there were tanks of fish and shellfish and live frogs and piles of different types of seaweed and dried fish as well as lots and lots of chicken feet! I tried some seaweed flavoured Pringles which were very delicious and brought back Chinese mini jelly shots, sweets and cute panda cakes for the kids. 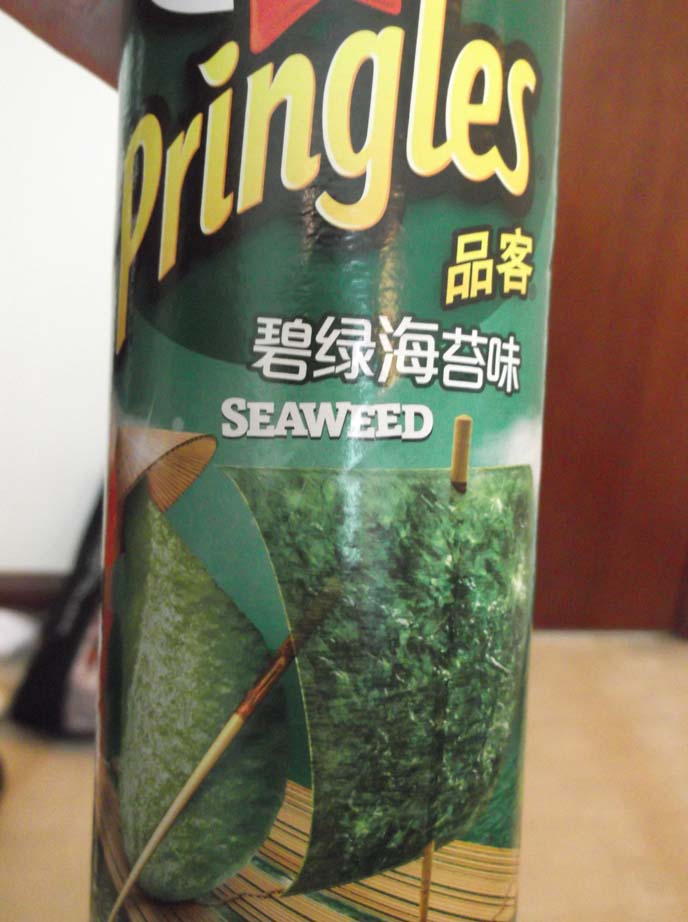 As well as the teaching I was very kindly taken out to see lots of local sights. As I said earlier the people were so hospitable and very keen to show us all the lovely things in the area. I was taken out every evening while I was in Shantou which as well as visiting lots of different types of local restaurants got a tour of the city. On my first rest day they organised a wonderful day out which was just the sort of day I would have planned for myself, two historic houses, a visit to a Buddhist temple and  lunch at a special Buddhist restaurant and a visit to an old city wall and bridge. I was very excited by it all! 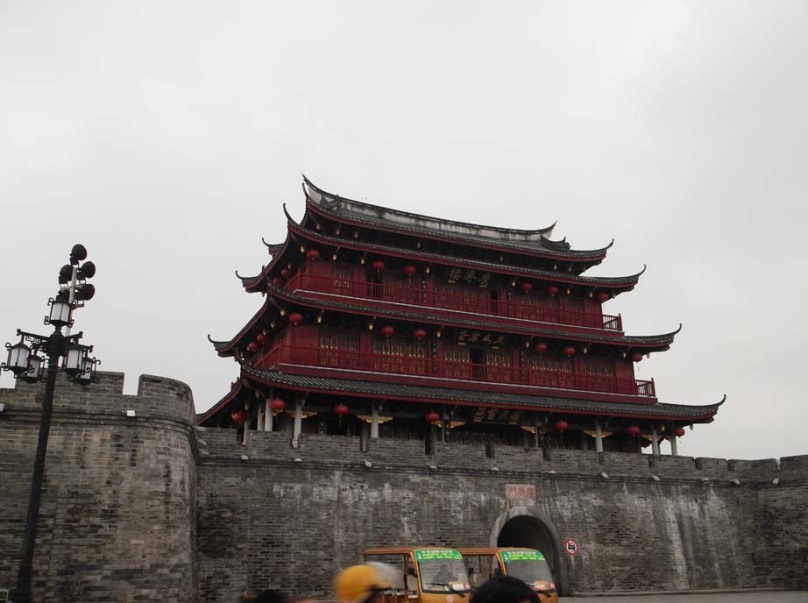 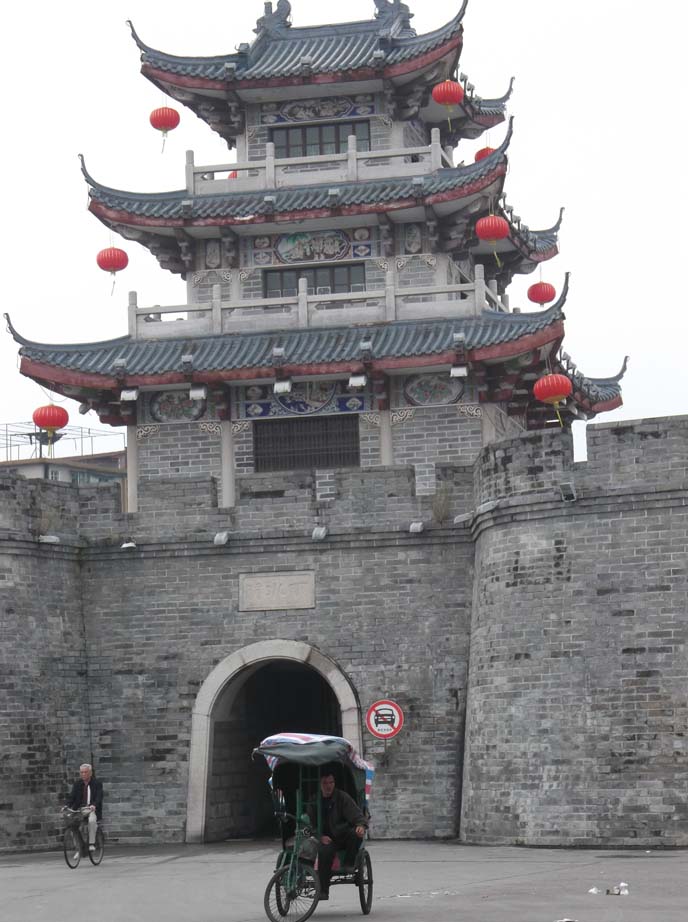 The first house was built in the 1920s with Western style decor. It contains 506 rooms all with beautiful wood carvings and balconies and the most impressive gates and doors. I was also amazed by the fact that it had been used as a prison for local officials during the Cultural Revolution and that there were pictures of Chairman Mao which had been done during that time. 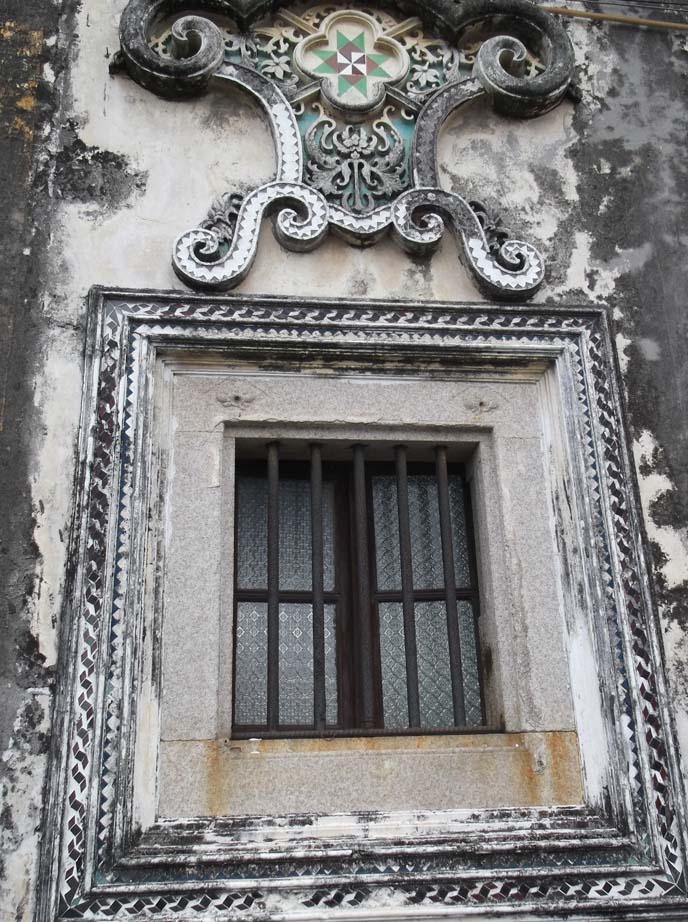 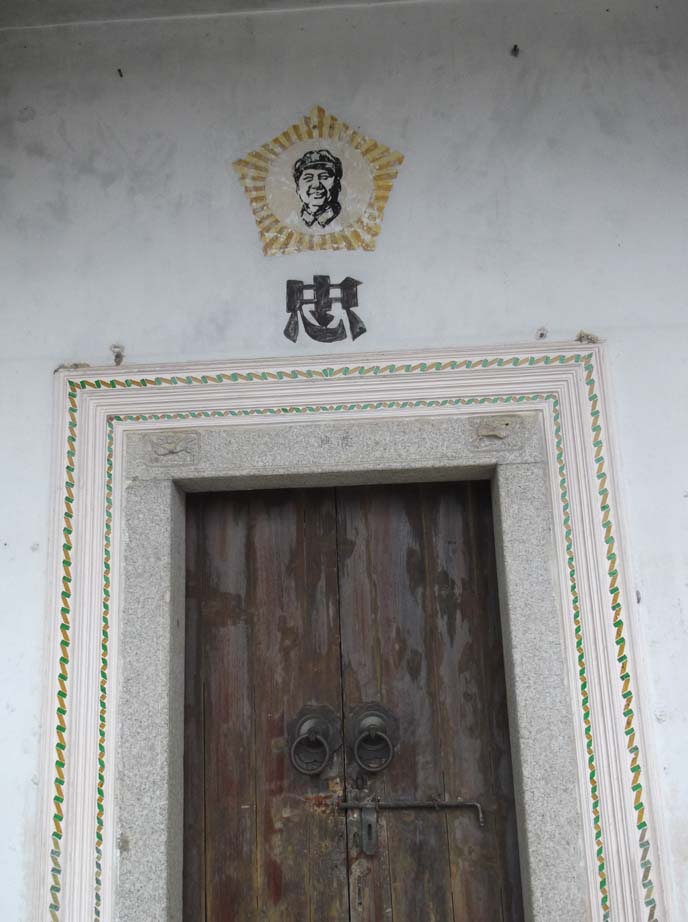 There was also an antique shop within the house with a treasure trove of antiques from all eras, pictures and statues of Mao and water bottles that everyone wore during that era and lots of carved wooden moulds that I originally thought were for clay but turned out to be to make cakes from rice, taro and pumpkin. I bought some of these to bring home for me and Ellie. 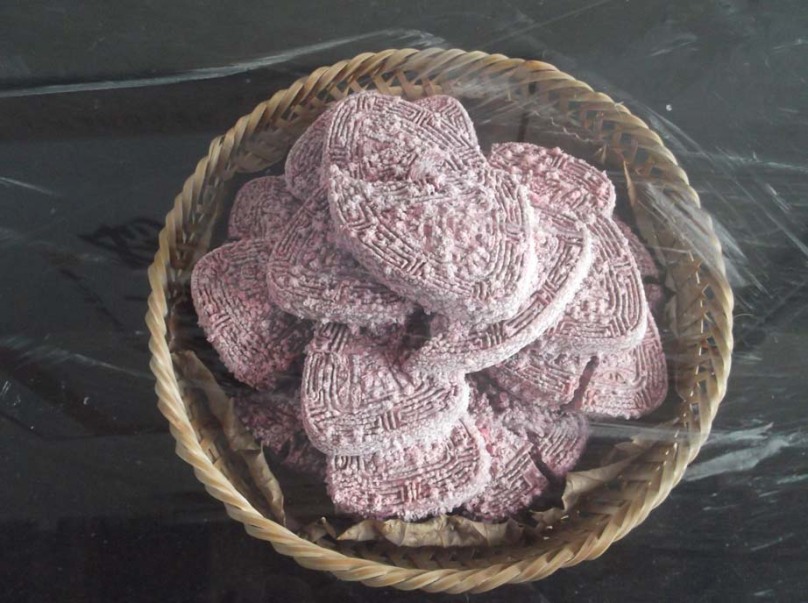 The temple was very different to the ones I visited in Nepal, those had more paintings on the walls but these had wonderful statues of Buddha everywhere and rich hangings. 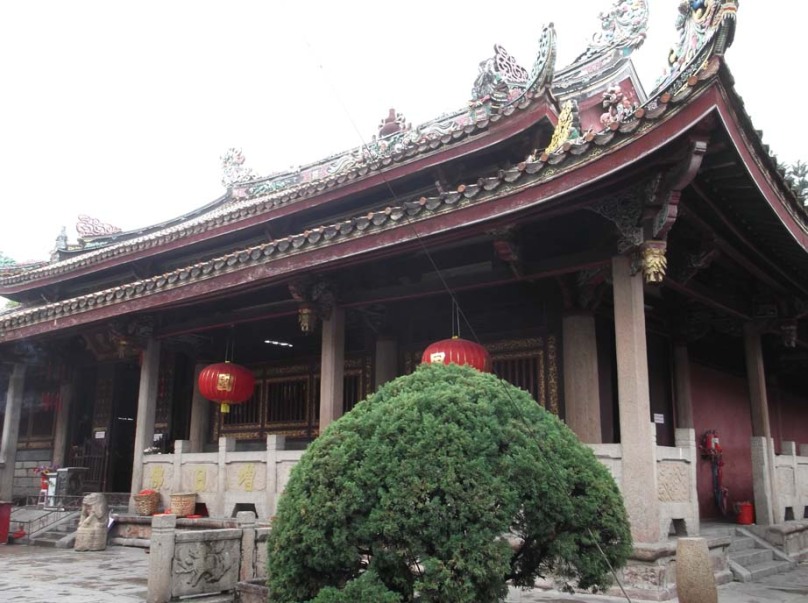 The other house was the home of a famous scholar from the 8th century and his house and gardens were beautiful with views over the city of Chaozhou.

We also visited the old part of Guangzhou – the city was formerly known as Canton and this historic area of Shamian Island contains some beautiful buildings from the mid 1800s. This an area where lots of people go after their wedding and hire Western style white dresses and have pics taken in the beautiful gardens and churches and we saw lots of couples doing that. 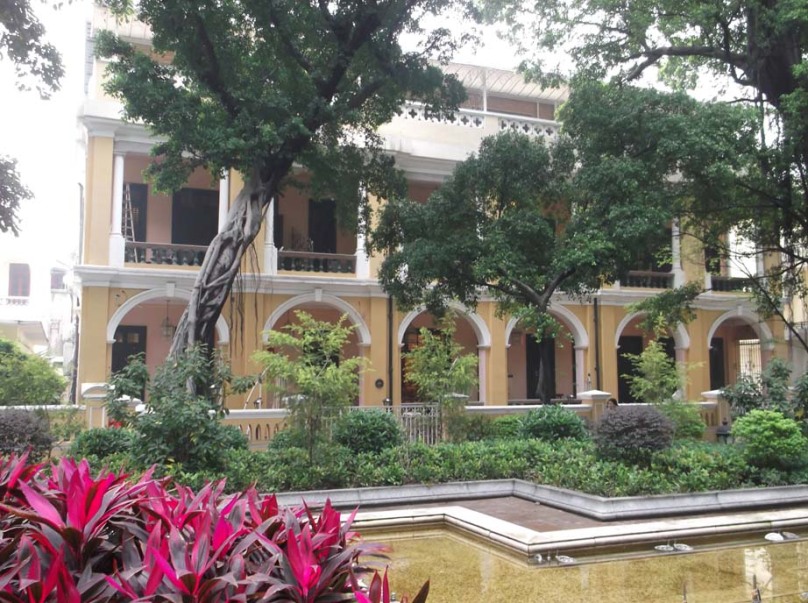 On my last night I went on a cruise on the river in Guangzhou, this is known as the Pearl River and in the evenings all of the skyscrapers along the river are lit up with neon lights, many of them change colour making the most wonderful display. The most famous of these is the Guangzhou Tower which is a TV mast with a ride on the top! My pics from the cruise are not very good but if you want to see the full glory go and look at this Flickr collection. It was an amazing experience – absolutely unforgettable! 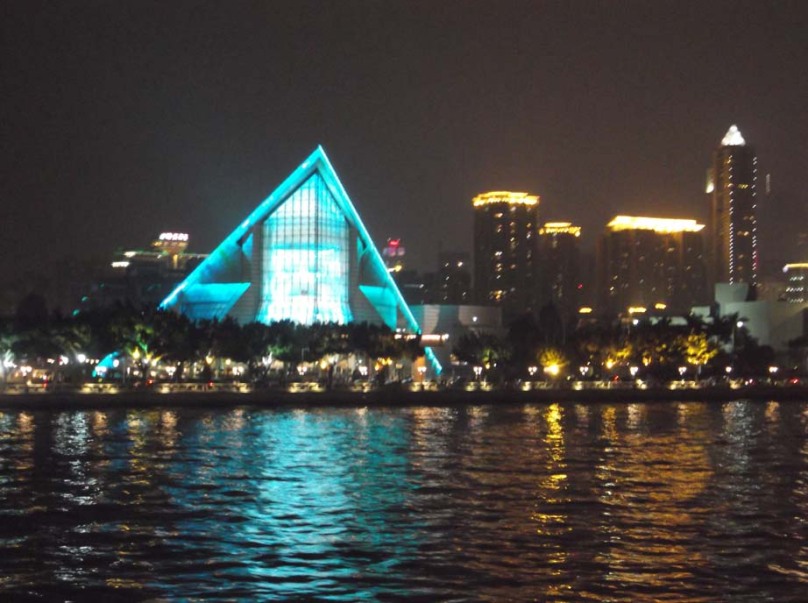 While I was there, with the help of my lovely translator Gloria, I started learning Chinese which I found much easier than I expected. Speaking will be the most difficult part as now I am home I have little chance to practise but while I was there I found it very easy to spot symbols over and over again and started to work out what was going on. I am very interested in languages, having taught English for so long and have bought myself some dictionaries and a book to help me learn a but more before I go back again.

Well I do hope that you have enjoyed reading about my trip, it is an amazing country and I was so lucky to be able to go and do all of this.

Thanks for visiting (or as the Chinese say ‘xie xie’).

4 thoughts on “My time in China”