Long time, no blog! I hope you have all been having fun while I have been away. I had a wonderful time at the Leeds International Medieval Congress, both in the sessions and in meeting wonderful people and socialising. It was so lovely to meet people who were interested in the same things that I am. I made some very useful contacts including some people who sent me their research which was very kind of them. It is brilliant to know that there are people out there interested in the same things that I am and I came home very enthused about my doctorate.

It was wonderful to be in such a lovely environment. I stayed in student halls which took me back a bit, though they were much more sophisticated than in my day, more like Travelodge rooms. Leeds University campus is very similar to ours with a mix of different period buildings and these were my favourite ones. Quite fitting given my interest in textiles as they were the Clothworkers’ Court. 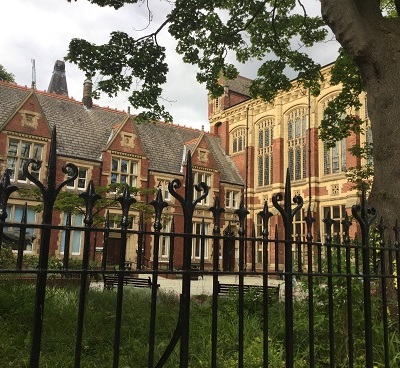 In the lobby there was a display of dyeing samples. I can just imagine the workers in the local textile industry coming to have lectures all about the different processes. 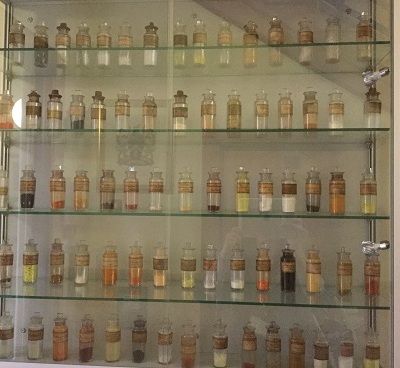 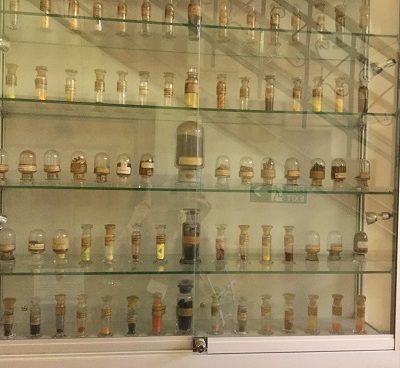 I went to quite a few really interesting presentations on textiles as well as ones on pilgrim badges and manuscripts. In total I attended about 36 separate presentations so I had a very busy week.

One of the most fascinating was about how they make facsimile manuscripts. There was a presentation and display by a company based in Germany, Zeireis Facsimiles,  where they showed the very complex process which was really amazing. They had some gorgeous reproductions including one of Mary Stuart’s book of hours below in the velvet cover. 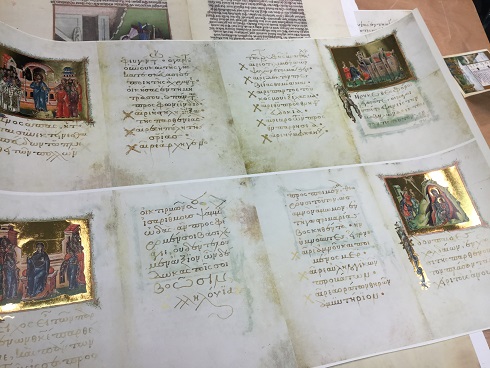 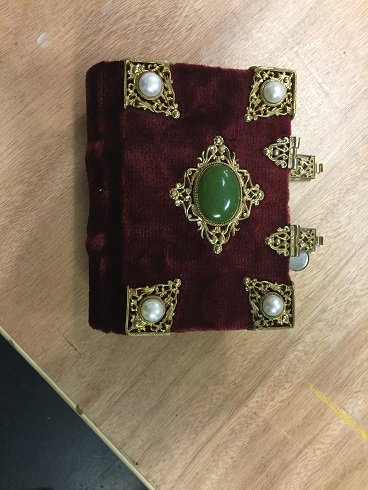 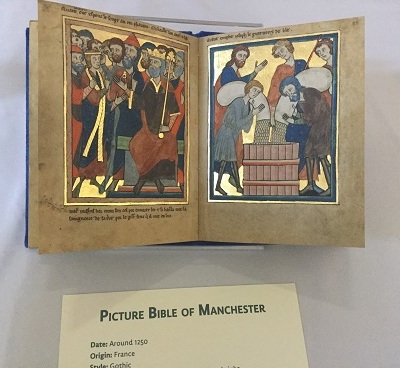 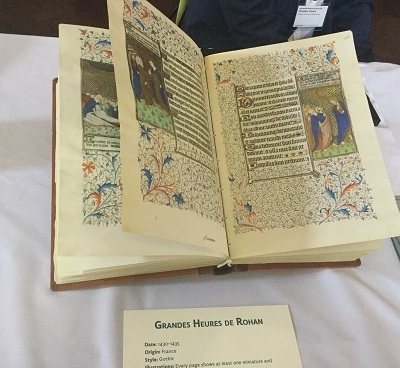 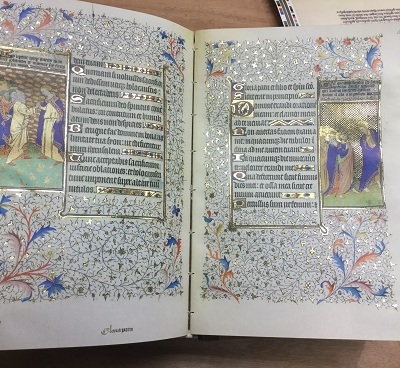 There were also displays every lunchtime from the Brotherton Library, which is based at Leeds University. Those were fascinating, though some were not as ornate as others, but just amazing that they have survived this long. 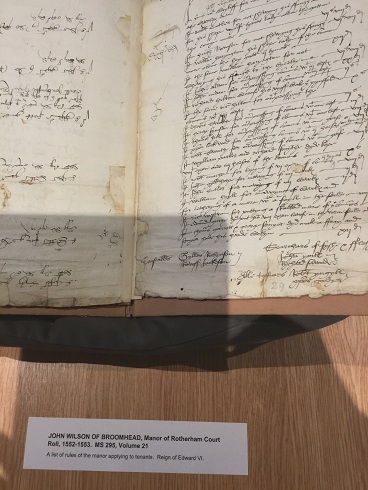 I would love to go over and look at some of the manuscripts there so will try and factor that in to some free time after completing the doctorate.One other interesting thing was that they hold the collection of drawings from one of the major sources we use for costume research for re-enactment, by Herbert Norris, so I would love to look at those.

On the last day there was a medieval market with displays and stalls including one of my favourite textile people, Tanya Bentham from Threads of Time. She has the most amazing embroidery on her blog, Opus Anglicanum. 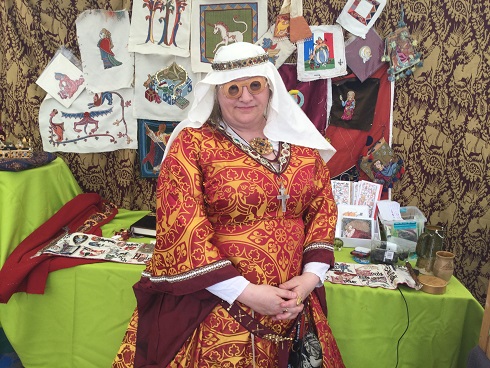 I also saw the lovely Jim of Trinity Court Potteries who I buy all my medieval ware from as well as one of my favourite thread suppliers, the Mulberry Dyer, who were doing a rope making demonstration. There was also book binding and falconry, it was just like being at a re-enactment event! 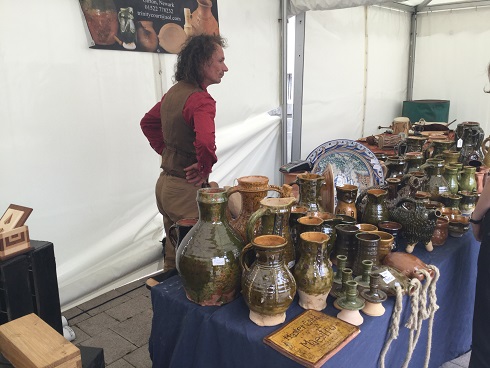 The combat displays were done by a very good group called Three Swords, you might recognise the heraldry on this shield as Jamie in our group also portrays De Warrene. 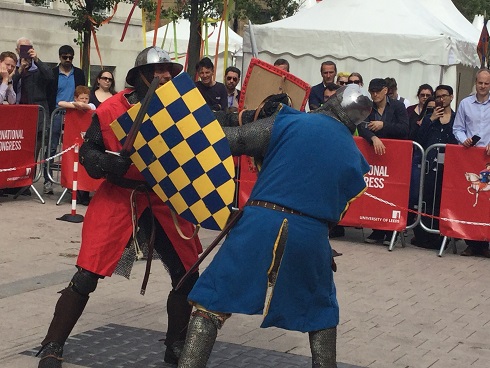 I loved the outfits that the Eran ud Turan group were wearing, such amazing fabric! They have a blog here which I am going to devote some time to as they have information about all the wonderful places that I want to travel to when I retire. 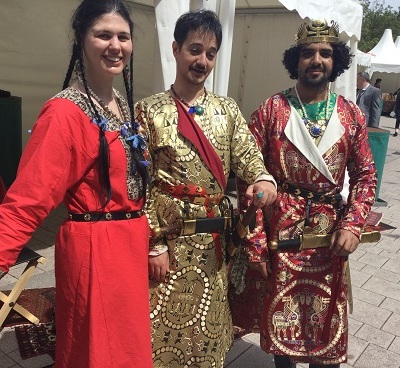 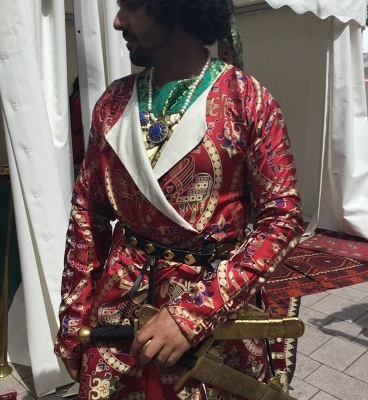 I have had a busy week since getting back from the conference, I made a shirt for Jamie as well as doing lots of sorting out and catching up from being away for nearly three weeks and then was off to the wonderful Tewkesbury event for last weekend. I will post about that next time as I need to collect some more pictures of the event first.

In other news the boiler has been poorly, it is nearly fixed but it is going to be quite expensive so I am glad that I have not got much else planned to do this summer. Jake is off in London today sorting out his visa for Japan which is very exciting, fingers crossed all will go well and he can start getting the final arrangements made.

I hope you all have a good week ahead, I shall be mainly working on the doctorate with a bit of work admin thrown in but plan to have some time at the weekend to craft. I seem to have quite a long to do list and really need to decide on an outfit for Lincoln at the end of August.

Take care and thanks for visiting.

2 thoughts on “Finding my people”