Well we had a very lovely time at Caldicot this weekend despite a start which involved a fairly damp set up and lots of traffic problems for friends due to road works and delays which meant we were still pitching tents in the rain at 10 o’clock on Friday night! But all was beautiful and sunny come Saturday morning so that meant we had a fab time.

Paul played a major role in the battle leading the English army (to victory on Saturday which was brilliant). He has not been to this event before but the character he plays in our shows, William de Bohun,  once owned Caldicot Castle so he had been planning a visit and as he has all of the kit in de Bohun’s heraldry it looked great on the field.

Here are the before shots of our boys before they went to battle. James, our newest member, was de Bohun’s banner bearer and looked very good in his kit.

Jamie has decorated his helmet with painted blue and yellow squares ready for his new character for next season and was a bit worried it would get scratched but it was fine.

I finished a couple of pieces of kit for the weekend, a wool tunic for a friend and this parti-coloured chaperon to go with the new dress that Ellie has made herself. You may remember this dress from our sewing weekend in Feb.

The chaperon is fully reversible so she can have an all dark pink one if she wants. I am very glad I have finished this as I cut it out of the fabric for the original dress I made her about 4 years ago and then it got put away and forgotten about! 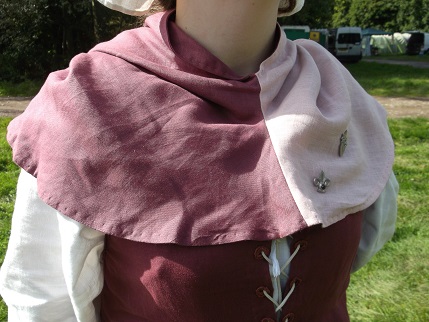 Here are a couple of battlefield pictures for you showing Paul and Jamie in action. Thanks to Tammy, James’ fiancé,  for these as she was on the sidelines with a camera.

The group went for a photo shoot round the castle later and took some very good pictures. Here is one of Paul and Jamie at the top of the castle tower. 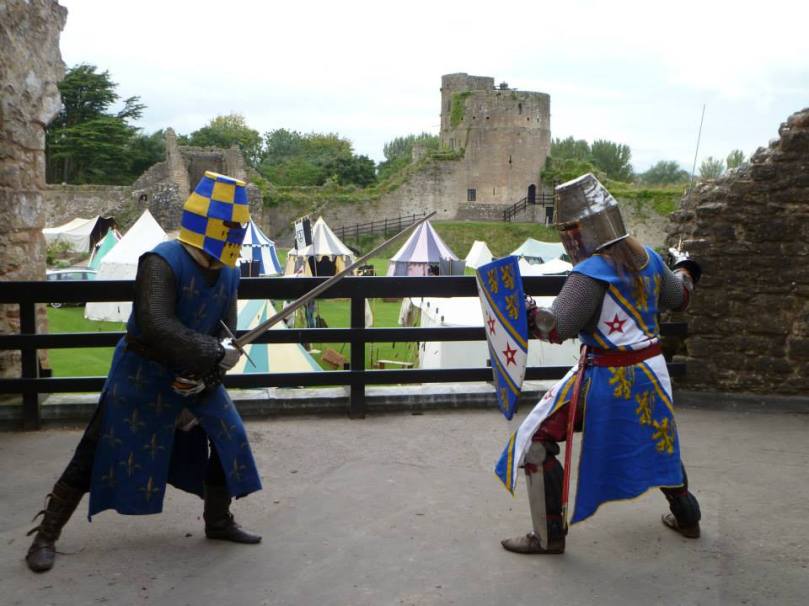 Ellie and I had a day out after the event as we stayed over on the way back to tick another couple of Trust properties off our list which I will post about later.

An excellent weekend all round.Now for a nice quiet week working on my doctorate with a bit of crafting and walking in between 🙂 Lovely stuff!

Hope you are looking forward to a nice week ahead, thanks for visiting.

One thought on “Wonderful weekend in Wales!”