Hello again, I hope that you have all had a good week.

I have been enjoying another weekend at home and our first at home BBQ of the year, my last weekend here for two weeks as I have shows then a holiday with my friend Kerry!

Last year we took the opportunity to travel round some of the National Trust properties down South after one of our shows and are doing the same again this year going to visit some places in Somerset, Dorset and Devon.

I am so happy that the season has started again, the joys of cooking bacon butties for breakfast outside the tent and meeting lots of lovely people – it is a great way to spend a weekend. Look at this lovely tent owned by one of our friends – wouldn’t you love to camp in this?

The theme of the first show this year was crime and punishment as it was in Sherwood Forest the home of Robin Hood and his band of merry men. We had another great weekend with really lovely weather so lots of people came to see us. It was just a small event with about 8 groups but there was plenty to see in the living history camps.

It was also a very significant first because Ellie came up in Kim and we drove all the way to re-enactment in the car! She did really well as we went on the motorway and she was not at all fazed (even when there was a big lorry trying to come into the lane). I am really proud of her and it was very lovely being driven all the way there (and back as well by my brilliant friend Kerry).

Because of having all this transport we were able to take the medieval tent and some stuff for the display which was a real luxury, am very happy in any tent but to have my medieval one is very special 😉

We were camped with some friends who were doing weapons and armour talks all weekend and we did our usual headdress and embroidery talks which was a nice complement to their display.

This picture shows the camp after the battle with the boys’ arming jacks and paraphernalia everywhere!

And we had the great excitement of a new recruit to the group at her first event. And not just a new recruit for the main group this is our new sister for our little watercarrying group. Here is Sadie all dressed up and ready to go for her first show. 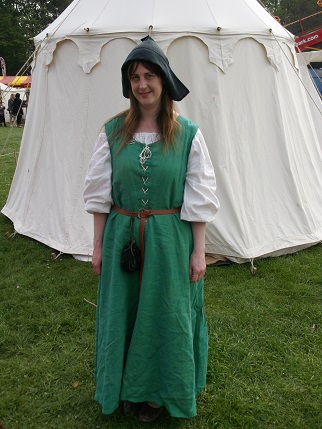 Sadie works with Ellie at Hardwick and has been sword training for a while but decided she would like to join us as well and she really enjoyed herself, she will be coming to many of our future shows as well.

Thanks for visiting and see you in a couple of weeks.

2 thoughts on “Outlaws in the Forest”