Some years ago in 2009 I did a post entitled ‘Home alone ……. with a pumpkin’  as both the kids were away and I was making pumpkin soup. In that post I wrote about how Jake would be leaving home so I was practising then for the time when I would be home alone for good.

Well this is it and Jake has left for University. We took him and all his belongings (and there were a lot of them when piled into my sister-in-law Amanda’s car!) all the way up north to Teesside University where he is happily settling in to his student hall.

Here is the outside of the halls of residence , not the most glamorous of buildings but Jake chose it as it has very large student rooms and good communal facilities and is very near campus. 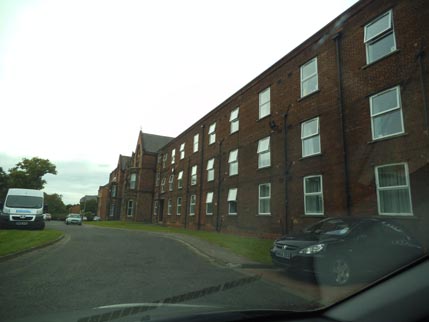 Here he is – with top hat of course – moving into his room.He says he has space for a grand piano but don’t think he will be able to afford that on a student budget! It looks a good room for parties though as it is twice as big as the space shown in this pic.

It doesn’t seem two minutes since we dropping Ellie off at her halls of residence – you can see her at her first day at her halls in this post .

Hope Jake has a fab time, we are very proud of him

And of course now I get to start sorting out the new craft room, did a little bit last night but I have a lot of stuff to move – am hoping to be able to show you pics at the end of the week.

Still have not really decided on a decorating theme, was going to do a vintage/Cath Kidston look but most of my fabric is either Xams stuff or medieval so don’t know what would look best. Maybe I should just go for a Santa’s grotto theme and then I could have all my ornies out year round, that would be pretty 😉

Am going to my new knitting group in the village tomorrow, Wool and W(h)ine, held at one of the local pubs (what a good idea) so am taking a simple pattern as don’t think I will be able to concentrate on anything much.

I was out partying this weekend and met a couple of the knitting group who are very lovely. One of them is an ex   re – enactor who has just set up an online fabric store which I will get the details of and post here! How exciting, I knew I was so right to move here.

I have had a wonderful week, on Monday I went to see the Mikron Theatre Company’s  latest production at one of our local pubs – a wonderfully funny play called ‘Losing the Plot’ about an allotment. The info for the company is at the link above – do go and see them if you get a chance, brilliant unique theatre.

Since I now have no one to look after or feed I thought I would do my bit for the local wildlife so have bought a lovely new bird feeding station for my front garden. I was ignored for the first 24 hours but then got some lovely visitors, starlings, crows, two finches and two robins. Was difficult to get good pics but this one is lovely.

And as for the pumpkin it is nearly time to buy one for my favourite soup – Delia Smith’s Roasted Pumpkin Soup with Melting Cheese  – yum yum!

A busy week ahead but hopefully will have some crafting time. Thanks for visiting.

2 thoughts on “Home alone – no pumpkins yet!”