I have been doing lots of quilty things this week. Yesterday was International Quilting Day so it is very fitting that lots of my week should have been spent doing these activities.

The  first thing that I completed was this block to give to one of the members of my quilt group. She is making a charity block quilt and last month gave me a piece of cat fabric which I then added to make a crazy patchwork block. I was pleased with the way this turned out in the end as I has to do the join with the dark turquoise triangle in it several times as I could not get the points right. I have done crazy patchwork before when I have made bags but never with so many different angles so it was a bit of a challenge. It has helped improved my machine work which I wanted to get better at.

Yesterday I sent the whole day at the quilt group sewing day where I finally managed to get the rest of the pieces cut out and the whole of the top put together except for the borders which are cut. It was very helpful to have advice from the others as I am very spatially challenged so had a bit of difficulty working out which pieces to sew together first but got there in the end and I am very pleased with the end result. Consensus of opinion among the group was that it looks very nice as it is but I did still want to put the rabbit applique on then one of the group suggested making it double-sided with a fleecy backing and putting the rabbit on that side. I thought that was an excellent idea so am now going to source some pale pink fleece to do that.

One of the women from the group Christine, runs her own quilting business – she has a long arm quilting machine and also sells fabric and runs workshops and she had brought her wares with her so I had to have a little indulge. I bought this very cute cat fabric and co-ordinates which I thought would be a good children’s quilt – probably be an Xmas pressie at the rate I am going though! 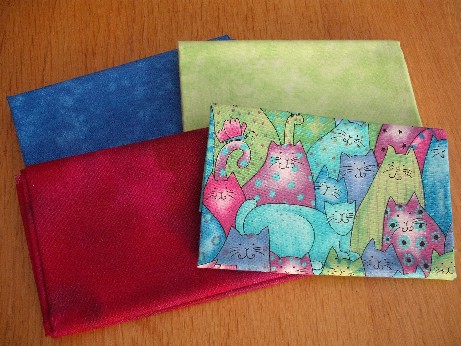 I also bought two different white on white prints to use as contrasts and this cute vintage bunny print. I now have quite a lot of fat quarters and  feel the need to have a nice box to put them all in like  Crazy Mom  has rather than them be in random drawers all over the lounge as I lose track of what I have bought. I want have them all together so that I can see all the different colours which I hope will help me plan more effectively what I want to make.Will have to buy a box and get sorting!

Kerry and Tracey from my medieval group came for a sewing day today – we haven’t seen each other for a long time so it was great to have a catch up. I didn’t get much done but did sew up the JBW stocking but they both finished little ornaments , Tracey’s was a lavender filled one for her kitchen which made my conservatory smell really nice and Kerry made a lovely Xmas heart ornie for her tree. They bought loads of Xmas fabric stash when we went to Harrogate last Nov so are starting to use that up.

Also managed to make three knitting sessions this week which was bit of a miracle so am making very good progress with the red chunky wool hat. The weather was extremely good at the start and the end of the week – though dull and misty in the middle  – so I may finish it just in time for it to go into a drawer for next Winter but at least I will be prepared!

I have been out in the garden twice doing some tidying up after the long soggy cold season but thankfully there is less frost and snow damage than last year so it won’t take so long to get the garden restored. It does gladden my little heart to see all the signs of Spring, my clematis are looking very good so far and the rhododendron are just about to bloom. I have lost a couple of azaleas and a pireus due to frost but will probably just get some nice bright primulas or similar to put in pots as I have a lot of empty ones at present. I have all of next week off work in order to do lots of house stuff so hopefully the weather will be kind and I can get a lot done outside.

Then we are off to Worcester for next weekend to see Ellie as it is her birthday the week after and we have a little history field trip to Stratford-on-Avon planned. I am hoping to come back with some Shakespearean inspired textile pics for you.

I hope you have a lovely week ahead and thank you very much for visiting.